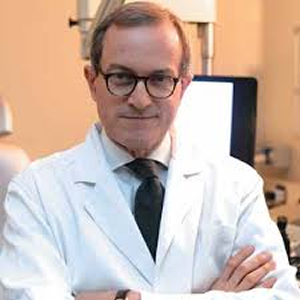 Professor Mario Bussi was born in Turin on 20th December 1952 and in 1997 graduated Cum Laude at the University of Turin in Medicine and Surgery. He then specialised in ENT and Cervicofacial Pathology at the University of Turin, again graduating with Cum Laude honours. He subsequently gained a diploma in Maxillofacial Surgery and Reparative Facial Surgery from the Universitée Paris VI (Univ. Pierre et Marie Curie) in 1986. In 1987 he qualified to practice as a Consultant in ENT. In terms of international professional experience, he studied and practised in numerous Hospitals and Universities in North America and France (including the Memorial Sloan Kettering Cancer Center in New York, the Manhattan Eye, Ear and Throat Hospital in New York, the Straith Memorial Hospital in Detroit and the Institut Gustave Roussy in Paris). He has undertaken research in various areas of his speciality, but he has particularly addressed issues inhering to head and neck tumours: demolition and reconstructive plastic surgery, ENT immunity problems (district oncology, Waldeyer’s ring, and upper airways) and psycho-oncology. He has authored more than 300 national and international scientific publications and is a member of numerous Scientific Societies: the Società Italiana di Otorinolaringoiatria (SIO), of which he is a Board Member, the Associazione Italiana di Chirurgia estetica facciale (AICEF), of which he is the Vice President, the Associazione Italiana di Oncologia Cervico-Cefalica (AIOCC), of which he is a Board Member, the Société Francaise d’Oto-Rhino-Laryngologie et de chirurgie de la face et du cou (SF acronym needs completing ), the European Laryngological Society (ELS) and the American Academy of Otolaryngology, Head & Neck Surgery (AAO/HNS). Finally, he is the Vice President of the Associazione dei Professori Universitrari di Otorinolaringoiatria (AUORL). His registered surgical experience consists in over 12,000 operations conducted at the ENT Clinic of the University of Turin (where, from 1978 onwards, he was a Researcher and then an Associate Professor) and subsequently at the San Raffaele Teaching Hospital in Milan. For more than 10,000 of said operations, he was the lead surgeon. Since 1st February 2002 he has been the Director of the ENT Operating Unit at the San Raffaele Teaching Hospital in Milan; he is also a Full Professor in ENT and the Director of the ENT Specialisation School at the Vita-Salute San Raffaele University in Milan.